This is the list of papers presented in the MobilCase 2012.
1st International Conference on Mobile Learning, Applications, and Services (mobilcase2012) – organised by UTEM, Malaysia.

Abstract: This paper is to describe the design and implementation of Malay proverbs (peribahasa) automated detection on mobile platform. Proverb is a unique feature of Malay language in which a message or advice is not communicated indirectly through metaphoric phrases. However, the use of proverb will cause confusion or misinterpretation if one does not familiar with the phrases since they cannot be translated literally, yet logically. Therefore, this application was developed to identify proverbs appear in Malay text and display their actual meaning from the dictionary. The recognition process is done using the look-ahead and regular-expression matching approach.

Proverbs (peribahasa) in Malay language are beautiful elements to deliver advices, Malay teachings, moral values and comparison through metaphoric phrases [9]. They are normally short, generally known sentence of the folk which contains wisdom, truth, morals, and traditional views in a metaphorical, fixed and memorable form and which is handed down from generation to generation [5]. Although proverbs do beautifies Malay literature, however this brings challenges to machine translation since proverb cannot be translated literally, rather logically [4].

There are four categories of Malay proverbs (as described by Abdullah & Ainon [1]) which are simpulan bahasa, perumpamaan, bidalan and pepatah.

Bidalan – phrases (pepatah) that started with jangan, biar or ingat. Example: Kalau kail panjang sejengkal, lautan dalam jangan diduga; literally means if you have a short hook, do not attempt to fish in the deep sea, yet the actual meaning is if you have little knowledge, do not dare to dream big.

Technically, simpulan bahasa contains two combined words, and the rest of the categories have more than two words. This number of words criteria is important in the identification process of proverbs.

Proverb is one category of multiword expressions (MWE). There’s a research by Rais et. al. [6] indexing the Malay MWE using combination of query translation approach and weighting schemes. The researchers stressed about having a good dictionary are crucial in multiword detection. However, there’s another work by Aiti et. al [2] suggesting several linguistic patterns in MWEs detection. Still the system needs to rely on 412,228 words of Malay corpus.

On other researches directly focusing on proverbs, Brahmaleen et. al. [3] suggested a method in identifying proverbs in Hindi text and translates them into Punjabi. The approach implemented is pattern matching. The machine has a dictionary to map the Hindi proverb and the equivalent proverb in Punjabi.

There is another research from ATMA, UKM whereby they are providing a searchable database of Malay proverbs and idioms [8]. The application receives a complete or a part of proverb/idioms, using the SQL pattern matching to search the list of the proverbs/idioms, and the outputs are all the proverbs/idioms that similar to the user’s request.

Dmitra [4] studied the METIS II translation engine which capable of translating several languages such as Dutch, German, Greek and Spanish into English. The pre-translation process involves tokenization, lemmatization, tagging and chunker. By using the existing METIS II facilities, she managed to embed an idioms translation tool for Germany into English. However, the proverb detection is using the syntactic matching rules approach which is not to be elaborated in this paper.

The researchers decided to experiment with the combination of look-ahead and regular-expression matching approach approach. By using these approaches, the Malay input text will be tokenized and compared to the proverb database. The searching process is done by combining a token to the next one. This combination of tokens is then searched in the proverb database. The output is the list of proverb detected in the input text, with the meaning of each proverb. The processes are summarized in the Figure 1.

The database consists of 3000 Malay proverbs, resides in the phone itself. This is to minimize bandwidth consumption and also for faster result display. A simple approach is used to identify simpulan bahasa; it is formed by two combined words (Algorithm 1). As for the rest of the Malay proverbs, the Algorithm 2 is implemented. These algorithms are implemented in the proverb detection module of the application, after tokenization (Figure 1).

Algorithm 2: To detect other proverb (other than simpulan bahasa). 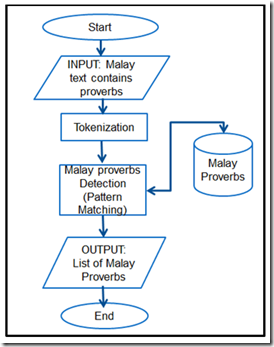 These are several challenges in identifying Malay proverbs in text using pattern matching;

b) Another word in between (stopword)

The researchers found out that by using simple pattern matching, it failed to detect proverbs that have the aforementioned problems.

— “bagai cicak makan kapur” means 1) ashamed because of his own offense, 2) pleased.

— “ada air adalah ikan” means 1) there must be people in a country, 2) fortune is everywhere.

Brief testing and observation has been done to the result of this application. The researchers concluded that there are much more to be improved, including introducing another approach. One of the approaches to be studied is the syntactic matching rules proposed by Dmitra [4] for detecting Germany idioms.

This Malay proverb identifier is a prototype to experiment with the pattern matching approach on mobile platform. Though it is still in experimentation stage, the researchers hope that it could contribute to the public by facilitating the new Malay language learner. The application mentioned is available currently for Android platform at http://bit.ly/pbahasa .